Let’s cut right to the chase: “de Blob” is worth the price of admission.

For those Wii owners who feel abandoned by third-party developers, it’s a paint-slathered roll in the right direction for the system’s future.

This offering from developer Blue Tongue and publisher THQ is destined for cult status, but it should be played by everyone who owns a Wii.

You play as Blob, who, from his perch on a hillside, sees the invasion of the INKT Corporation space ships on his hometown — the brilliantly colored Chroma City. INKT sucks all of the color from the city — the buildings, the plants, sidewalk trash, and even from its citizens, the Raydians — for no apparent reason other than the fact that they love the bland look of a monochromatic decorating scheme.

They enslave the Radians-henceforth known as “Graydians”, in their captured state-and change all of the local hangouts and neighborhoods into dull office buildings and police stations. Blob sees this happening, and comes to the aid of his fellows by rolling around in paint and injecting color and life back into the beaten down city and its people. This is the Color Revolution, after all.

The delightfully named Comrade Black is your main adversary, as he is the leader of the INKT Corporation and the man behind the deportation of color. Though not a single sound besides that of gibberish comes from his mouth, he is an entertaining character in much the same way that the Raving Rabbids are, thanks to the humor and personality they exude in their wordless dialogue and actions.

The story itself is thin, but in the same way that a story for a Mario game would be; there’s a problem (the city lacks color) and you need to solve it (repaint the world and defeat the bad guys). The reason to play de Blob is not for the story-though the cut scenes are well done and humorous-but for the gameplay.

The game is controlled simply: you roll around using the analog stick on the Nunchuk, and you jump using quick flicks of the Wii Mote. Rolling around is easy enough, and is incredibly satisfying, since everything you move over will become the color that you are carrying on Blob at that time. Jumping is another story though, as occasionally you will not jump where you would like to, thanks to a lack of response from the flicking of the Wii mote.

It should be noted that this is a very limited problem — one that will occur just a few times during an entire play through — but it does exist, and makes you wonder why jumping wasn’t simply mapped to a button (or an option to change the control scheme wasn’t made available). Overall, it’s a minor quibble, but some people may be concerned with it.

A first-person view of the camera is controlled with the directional pad, and is useful for finding objectives that are in hard to see or reach areas along walls or the skyline. There are four types of objectives: paint an area a specific set of colors in a set time limit, race to a destination, defeat the INKT police force in the area, and reclaim an old Raydian landmark through the power of paint. The last of these uses an incredibly satisfying mechanic, as you jump inside of the building and shake the Wii Mote and Nunchuk back and forth in order to inject your paint points into it. Though rhythm is not required, there is musical accompaniment to the shaking (such as a cowbell) and you will catch yourself matching the beat of the infectious music. 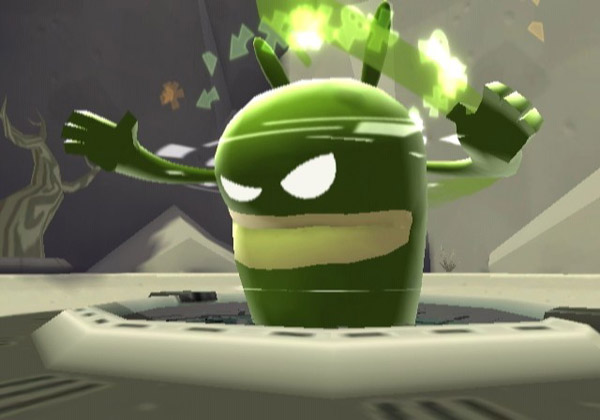 After completing the challenges you will unlock new ones in each area, and completing an entire set of challenges will earn you awards at the end of the level. There are awards for freeing all of the Graydians, painting the entire map, finishing a level speed run style, and various other elements, and you can also unlock a pair of sub levels for each of the main story portions. These are designed to be more difficult challenges where you are awarded medals depending on how well you did, giving you reason to return to both the original levels and the sub variety after completing the story mode.

Blob can also hook up with up to three friends for multiplayer fun outside of the main game mode. Here there are various challenges turned into contests, such as painting as many buildings as you can, or racing through a portion of a level. Though these modes are not as fleshed out as the single-player and the split-screen doesn’t hold up as well graphically, it’s still fun if you’re trying to show off the game for your friends and get them interested in the main attraction.

The music itself is one of the main draws of this game. The soundtrack is one of the best in recent memory, and the more you paint and the deeper you delve into a level, the more upbeat the music becomes. This mechanic works to immerse you into the gameplay, as you can feel yourself picking up speed with the music in order to keep things running smooth. Not only do the funky jazz tunes fill out and pick up steam as you paint, but they also feature different instrumentation based on which color you are using. Want to hear a DJ scratch a turntable while roll around Chroma City? Mix colors to turn brown and listen to your tune of choice. Add to this that you can select any music you have unlocked for use in any level, and you are sure to enjoy this portion of the game as much as Blue Tongue hoped you would.

The game plays well, it sounds great, and the graphics are on par with both of those areas. The opening movie looks as good as anything Nintendo has produced this generation-think of how gorgeous the animated intros for “Super Smash Bros. Brawl” and “Mario & Sonic at The Olympics” looked, and you wouldn’t be far off-and the cut scenes use the same style. INKT, and their monochrome color scheme, are designed beautifully despite lacking color, and the city looks great for it even before you splash around in your purples and yellows. The style is unique, the graphics are crisp and clear, and it is obvious Blue Tongue put a lot of work into getting a great look out of the Wii hardware. Here’s hoping that more third-party developers take notice in the future.

Blue Tongue has made a fantastic and original adventure on the Wii, while putting together a universe of likable characters, both good and bad. Though the game has room for improvements that a sequel could address, this product is one that you do not want to miss.

There is always a clamor for unique efforts on the Wii that utilize the hardware, and Blue Tongue has done just that with a game that will have you coming back again and again. If you have money for just one Wii game during the next few weeks before the holiday releases start to pour in, use it on “de Blob.” You won’t be disappointed.