Beer has long been a part of American politics, and today is no different, from “who would you rather have a beer with”, to brewers crafting recipes named after candidates.

From the early days of George Washington’s home-brewed ales and James Madison’s attempts at creating a national brewery, patriots and early American leaders relied on beer for nutrition and inspiration.

In more recent history, Jimmy Carter’s brother, Billy, promoted his own brand of brew, Billy Beer, shortly after the Georgian peanut farmer was elected. During the last presidential election in 2004, polls found that Americans would rather have had a beer with George W. Bush than John Kerry.

Throughout the country’s existence, the humble hopped beverage has lubricated the wheels of democracy by sparking debate or resolving conflicts. And the beverage has come up in some pretty interesting ways this year on the campaign trail.

Senator John McCain faced criticism after the Associated Press highlighted the candidate’s extensive fundraising connections to Anheuser-Busch through his wife’s fortune and high-powered position in Hensley and Co., the nation’s third-largest A-B distributor. Although McCain’s financial connections to the brewing giant may be close, don’t expect the White House to replace the stemware with Pilsner glasses. McCain’s campaign manager Jill Hazelbaker told the Associated Press that he “very rarely, if ever, drinks alcohol.”

But who could forget Governor Sarah Palin’s now infamous appeals to “Joe Six-Pack”?

In August, Democratic candidate Barack Obama’s taste for beer was challenged during an interview on CBS’ 60 Minutes. During a discussion of his campaign’s attempts to court blue-collar voters, Steve Kroft, the interviewer, remarked to Obama, “You tried really hard to reach these people. You went and sipped beer, which I know you don’t particularly like.” Obama promptly told the reporter that he had a beer the previous night and then said, “Where does the story come from that…I don’t like beer? …C’mon, man.”

Though politicians may use beer as an image to appeal to the common person, some breweries and drinking establishments have long abided by the folk ethos of not combining politics and alcohol, while others embrace the mix. With the heightened energy of the upcoming election, many brewers and barkeeps around the country are getting into the spirit of the election season. 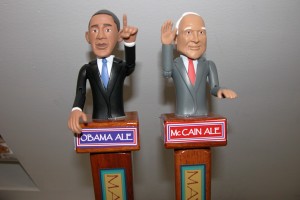 “What better way is there to celebrate the diversity of ideas and thoughts that come out every four years during our election process with something that goes way back to our founding fathers, that’s beer and ale,” said Wayne Mayer, director of marketing for the Half Moon Bay Brewing Company.

The northern California based brewery’s ALECTION lets customers “vote” for a candidate by buying either the “Obama Ale,” or the “McCain 2008,” re-labeled versions of their English-style light ale. Each week the results are tallied on the brewery’s website.

While encouraging their drinkers to show their preference for the candidates, the style of the beers themselves is the same.

“We did that for political reasons so no one could say that we were trying to favor one over the other,” explained Mayer.

Currently the Democratic candidate is in the lead “by quite a bit,” according to the brewery. When Blast contacted Half Moon Bay in mid-October, Obama had 4,991 bottles over McCain’s 1,274.

Unlike the real upcoming vote this November, Mayer jested, “This is the only election where you can vote early, often, and legally.” 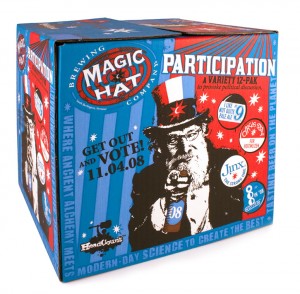 “Beyond the political packaging and beyond the beer itself, which is also politically themed, we actually as a sales team go into our bar promotions and register voters,” said Krissy Leonard, spokeswoman for Magic Hat.

Magic Hat partnered with HeadCount, a non-partisan, not-for-profit organization to register people to vote. On the night before the election, the brewery is sponsoring a concert at the Highline Ballroom in New York City to benefit HeadCount featuring Robert Randolph, Joss Stone, and other artists.

Winter variety packs are now being shipped but there should be more of the politically-themed 12-packs in stores until Election Day, Leonard said. 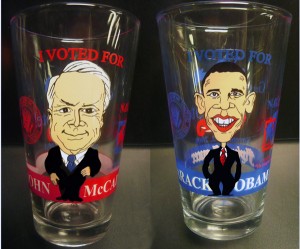 Below the Mason Dixon line, the Flying Saucer Draught Emporium, a chain of beer bars, is conducting another presidential poll. Patrons at the bars can buy a pint glass for $5 bearing either Obama or McCain’s face drawn as a cartoon, which is counted as one vote.

With 13 locations in Texas, Arkansas, North Carolina, and other traditionally red states, some might find the current standings a bit surprising. Obama’s 11,420 bottles leads McCain’s 9,220 as of Oct. 28, according to the company’s website.

Fort Worth, Texas and Cordova, Tenn. are the Flying Saucer’s only locations where McCain is holding a lead. 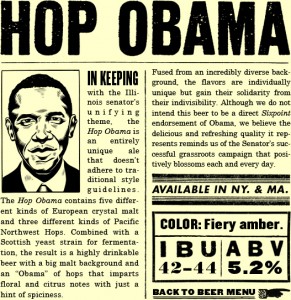 In New York, one of the strongest Democratic support bases, Sixpoint Craft Ales located in Brooklyn created the “Hop Obama” in honor of the democratic candidate’s grassroots campaigning style.

“We were tossing it around as far back as late September last fall,” said Jeff Gorlechen, one of founding members of Sixpoint. “Then his campaign started steam rolling. At the time it was all word of mouth, and we identified with that.”

After Obama won the first few primaries, Gorlechen and the other four workers at the brewery decided to brew the ale.

While the brewers may admire the candidate, Sixpoint stopped short of fully endorsing him, as their label points out: “Although we do not intend this beer to be a direct Sixpoint endorsement of Obama, we do believe the delicious and refreshing quality it represents reminds us of the Senator’s successful grassroots campaign.”

There are “many parallels” between the rise of craft and micro brews and Obama’s style of campaigning, he said.

“There was no marketing, no advertising dollars behind it. It’s hard not to admire him,” explained Gorlechen. “In the last five years the craft market segments exploded. It kind of caught the major breweries off guard. I think [Obama] did the same thing when he won Iowa.”

Available on draft in N.Y. and Mass., Gorlechen described the Hop Obama as a hybrid ale “sort of like a British session ale, sort of like an amber, sort of an ESB [Extra Special Bitter]” that uses Scottish, English, and German malts and three different hops from the Pacific Northwest. Also, a part of the profits go to Get Out The Vote, an organization that registers voters.

Of the seven ales produced by Sixpoint, it is currently their second best seller and the brewery sold its stock of the beer faster than any other single batch released for the first time.

Although one of Sixpoint’s best selling products, some bar managers have refused to serve their beer because it is mixing beer and politics, he said.

The “Ale to the Chief” by Colorado’s Avery Brewing Co. has hit shelves in the 32 states. “Instead of an Imperial Pale Ale we’re calling it a “ËœPresidential Pale Ale’ because it’s a democracy here, it’s not an imperialistic nation,” mused Matt Throll, beer manager for Avery.

This past spring, Adam Avery, the owner of the brewery, returned from a road trip with the idea of creating a politically themed beer. 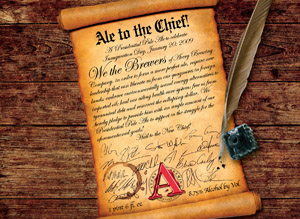 Overall, the reaction to the “Ale to the Chief” has been positive, the Brewery said.

“We’ve only had one person call up and complain to say “Ëœleave politics out of beer,'” Throll said. “We had to tell them that beer has been a part of politics a long time, that’s just the way it is. We weren’t setting out to offend anybody, but of course that’s going to happen.”

“It was not necessarily pro any of the candidates but pro change,” said Throll

Avery’s brewmasters have another batch of “Ale to the Chief” underway for Inauguration Day.

In the Midwest, the St. Louis Brewery Inc., producer of the microbrew Schlafly, is selling posters and T-shirts with altered versions of their labels featuring the candidate’s images. 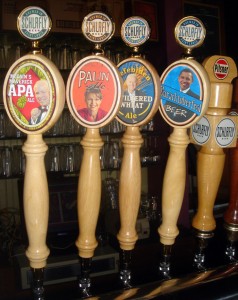 Two days before the Vice Presidential debate at Washington University in St. Louis, Brodsky learned that a church group would be screening the debate at Schlafly’s downtown brewery and restaurant.‚  To celebrate the debate, Brodsky made four custom tap handles and posters featuring altered “Ëœpolitical versions’ of the brewery’s labels.

Although the other candidates’ names were easy to juxtapose with the labels, Brodsky said creating one for McCain was difficult. He settled on “ËœMcCain’s Maverick’ American Pale Ale.

“Its basically just parody,” he said. “They were a big hit, actually.”

Even though the church group holding the screening was “more conservative-leaning,” Brodsky said, “Still, the Baracktoberfest and the Hefe-Biden taps sold far more.”

Schlafly is now selling a limited number of Baracktoberfest and Palin Ale T-shirts on its website.

Beyond the tension and mudslinging of the election, it’s all in good fun, he said.

“The point of this is that everyone’s really exited about the election around here. We want to encourage that energy, encourage people to vote,” said Brodsky.