As much of a critic as he is of the Bush presidency, Oliver Stone’s biopic of our current president didn’t make you hate Bush – it made you feel bad for him.

Telling the story of George W. Bush’s presidency, the rightly titled “W.” (pronounced “Dubya”) is ironic and critical, but makes President Bush look like the victim rather than the enforcer of the manipulation and deceit that has brought his popularity rating to a historic low.

Playing Bush is Josh Brolin, who is proving to be the next great actor of our generation. Following his critically acclaimed role in the Cohen brothers’ Oscar-winning “No Country for Old Men,” Brolin gives a near perfect interpretation of good ol’ Dubya.

The only issue with Brolin’s portrayal of Bush was that he was cast to play Bush in his college days. While Brolin was able to pull of the character of Bush, his wrinkled veneer gave away the 20 year age difference between how old he is and how old the character he was supposed to have been playing was.

The all-star player was Thandie Newton’s Condoleezza Rice, whose awkward facial expressions and nasal vocal-interpretation of the Secretary of State added new levels of humor to some of the more straight-forward character caricatures.

“W.” chronicled the story of George Bush Jr.’s life through his interactions with his father. Stone portrayed Bush’s actions as only wanting to live up to his father’s expectations and earn Bush Sr.’s approval. The jealous of his elder brother Jed was undercurrent throughout the entirety of the film.

The story was told out of chronological order, which was confusing because it was hard to judge when it was supposed to have taken place. Eventually the contexts became clear, but, especially with the age issues with Brolin, the idea was there for telling Bush’s story thematically though un-chronologically, but it was not delivered as effectively as it could have been.

The themes were very strong throughout the story and the film was well-created. Introverted shots like Bush trying to catch a baseball in the outfield of his empty stadium and lines like Bush Sr.’s “Who do you think you are, a Kennedy?” really give interesting dynamic to what has become known as one of the worst presidencies of all time.

Stone ended the film just as Bush was going into his second term as presidency (around 2004) which I didn’t quite understand. The film ended on a bizarre note, with Dick Cheney coaxing Bush to enter into war with Iraq and eventually Iran, saying, “There is no exit strategy.” It didn’t really make sense for Stone to end the film where he did when so many more important and critical events happened after the invasion of Iraq. By leaving the second term of Bush’s presidency out of the film, he did not create an apt representation of the president that so many have come to despise – unless Stone has secret plans for a sequel.

“W.” was an incredibly well created piece of film, both visually appealing and character driven. It gave new insight into a public figure in ways that have not been shown before. Thought it had a few minor flaws, “W.” is worth your money. 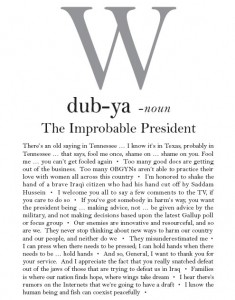