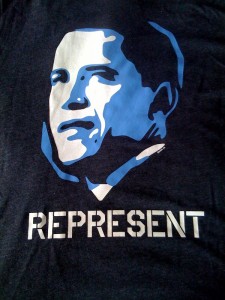 I turned some heads.‚  This guy looked pretty jealous when I told him I could vote.

Even up here in Canada, there are a surprising number of people walking around in Obama shirts.‚  I’m pretty sure all of them can’t vote.

I saw a lot of merchandise for both candidates today, an Obama jack-in-the-box, Obama and McCain Halloween masks (guess which one was scarier), watches, lunchboxes and even some Obama underwear.‚  Weird.

This is by far the most commercialized and publicized election in American history.‚  It’s cool and disturbing at the same time; campaign spending is approaching $5.3 billion.