Michael Dunlap is no stranger to the life of a starving artist.

Four years ago, the 24-year-old one man band who goes by the stage name Totally Michael was driving himself to shows in a 1984 Honda Accord “" a “hybrid” in the literal sense, which his stepfather had welded together from two separate vehicles, one blue and one brown. (“When you were inside the car, you could look down and see the ground,” he said. “It was pretty awesome.”)

To make rent, he donated plasma twice a week and participated in clinical trials.

“I’ve kind of been a bum,” he readily admitted. “I’ve only had one real job in my life, and it was telemarketing, which was pretty horrible.” 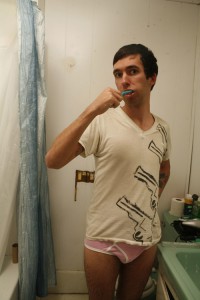 Luckily for Dunlap, his musical career appears to be taking hold. His synth-heavy debut album of infectious pop-punk, “Totally Michael,” will be released on October 14. He’s upgraded to a Nissan Sentra (the Accord was totaled in an accident in Phoenix, where he was performing) and is touring across North America this fall, opening for MC Chris.

Growing up in the small town of Cabot, Arkansas (pop. 21,000) as the youngest of eight children, Dunlap spent his youth skateboarding and going to see local bands with friends (“They were pretty crappy bands, but it was awesome to us,” he recalls), before picking up a guitar himself and playing in local punk groups.

A quasi-quarterlife crisis prompted Dunlap, at the age of 20, to pick up and move to Bloomington, Indiana after he attended a three-day music festival there.

“I had lived with my mom for 20 years and I was just like, “ËœI gotta get the fuck outta here. … I should probably stop mooching,'” he said. “(Bloomington) was pretty much the only place I had ever seen besides Arkansas, so I was like, yeah, I’ll move here.”

He began making music on his own with computer recording software and reveled in his newfound musical autonomy.

“(In previous bands) there were always creative differences, and not everybody would agree on certain parts in songs,” he says. “What I liked about doing it by myself is that all of the creativity is on my part. “¦ I never have anybody telling me they didn’t like what I was coming up with, or telling me to change something. That’s probably the best part of it so far.”

For now, Dunlap’s stage shows involve just him, a guitar and an iPod (“I used to bring up my laptop, and then realized people throw beer a lot, and it wasn’t the best decision,” he explained). Crowd participation also plays a role, with Dunlap often fostering a pep rally vibe by dividing his audience into two sides for the competitive ode “Cheerleader vs. Drillteam.”

“I’ve thought about getting other musicians “¦ to make me seem less like a dumbass,” he said. “But at this point I’d probably go broke real quick.”

He cites fellow laptop guru Girl Talk as an influence, as well as Dan Deacon, Japanther and Matt & Kim, and said he tries to model the at times irreverent tone of his songs after Blink-182.

“I think they were fuckin’ amazing,” Dunlap said. “They could write pop songs that were slightly humorous and they did it really well.”

With a nasally delivery reminiscent of Offspring’s Dexter Holland and melodies similar to the likes of Bowling for Soup, Dunlap manages to get away with singing about high school gossip fodder, despite being in his mid-20s, on songs like “Prom Night” and “Cheerleaders vs. Drillteam.” His channeling of a nervous, disaster-prone date on the former is nothing short of endearing. “I’ve got my baby blue tuxedo but my tie has vanished from the scene / I guarantee this won’t be the last headache I face tonight,” he laments.

“I never did any writing at all, and I definitely think that kind of shows,” Dunlap says. “I don’t want to take myself too seriously. “¦ Lyrics are always the last part of my songs. I hate them. I just want to write melodies.”

It’s true that the strength of Dunlap’s songs lies in their hooks. But while the songwriter may downplay his poetic abilities, his lyrics are, at their least impressive, typical of similar pop-punk bands (“I’m the number one topic in her diary / When you look away she’ll be all over me”), and at their most, laugh-out-loud zingers. Take this gem of a refrain from the gleeful “Ëœ80s throwback “Winona,” his love letter to the actress 12 years his senior: “I’m not a high-class retail outlet / But I’d love for you to steal my heart.”

Lyrically speaking, the only excessively sophomoric track is the still-catchy “Casual Satisfaction,” which describes the physical effects of attraction with lyrics too graphic for me to feel comfortable typing out.

Taken at face value, “Totally Michael” is a fun collection of accessible singalongs. It’s made all the more impressive by the fact that Dunlap’s is the sole guiding hand behind every facet of each track.

“When it first started, it was all for fun,” he said. “I had no idea I would even make any money at all doing it. Even now, if I wasn’t making any money at all, I wouldn’t stop. I love touring and making music.”

But as it turns out, things may be looking up. Dunlap has been counting small victories over the past few months “" starting with his transportation.