This is a new one for us, but season beer is all the rage, and we’re giving it a try.

Plus we just love saying the name!

We found the beer to be a great fall BBQ drink. It doesn’t remind you too much of the cold weather by filling and warming your stomach like some other season beers, but it’s definitely not the fruit-infused summer beers we’ve come to know and love. It’s Indian summer, early autumn, New England foliage (though they’re a Wisconsin company) beer.

Pair it with an everything hot dog and some cheese-flavored chips and pretzels.

Leinenkugel’s Oktoberfest is available in 6-pack bottles at supermarkets and liquor stores nationally and on draft at some bars and restaurant (we didn’t see any in Boston).

Six-packs retail at $7.99. Leinenkugel’s is currently available in 48 states. Oktoberfest is 5.1 percent alcohol by volume.

Here’s a little treat that definitely will fill your stomach: 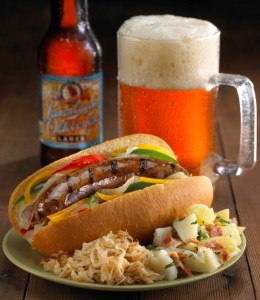 Place brats in a Dutch oven with sliced onions, peppers and butter, cover the brats with Leinenkugel’s Oktoberfest. Bring to a boil and reduce to simmer until brats are cooked. Remove brats and set aside remaining beer mixture. Grill brats until golden brown and return to beer mixture until ready to serve. Serve brats on fresh brat buns with your favorite toppings (sauerkraut, onions, peppers, ketchup, mustard).