There was a time when Dragon Quest games would be compared to Final Fantasy games, as each series was the flagship of its company-Enix and Square, respectively. Those days are gone, as they have since joined forces to become the Square Enix many know and love today, but with the remakes of various classics from both companies past coming back to retail, some of the comparisons can start again.

For example, Square Enix recently released a 3D remake of Final Fantasy IV, originally a 16-bit Super Nintendo classic that was built using an engine meant for the original NES. Because of this, the game was nowhere near as impressive visually as either of its FF successors. They added voice work, cut scenes, and a CG intro to the Nintendo DS version that incredibly made one of the greatest RPGs of all time an even better experience. 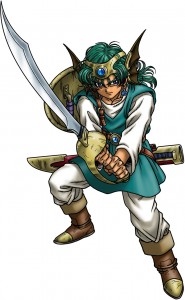 While FF has always been about pushing hardware and innovation, Dragon Quest has been more interested in staying old-school, and the recently released Dragon Quest IV: Chapters of the Chosen is no exception. Originally released as Dragon Warrior IV on Super NES here in North America, the graphics have been given a new coat of paint reminiscent of the original Playstation remake, and the localization has been revamped, but other than that it’s a bare bones affair (as far as improvements go) that plays like it was released in the distant past-and to be fair, it was.

Just because Square Enix didn’t go the extra mile with this gem does not mean that it’s a bad effort, though. The original game was innovative at the time, with four distinct chapters preceding the final-and longest-one. These four chapters are meant to introduce you to the characters that will assist the Hero (or Heroine, as you’re given a choice when you start your journey) one at a time, until you complete the four and start a new quest with the Hero you picked and named a dozen hours beforehand. This system is still refreshing today, but if you are not into level grinding, then it may be somewhat of a turnoff for you.

Equipment in Dragon Quest games is always expensive, and this game follows that tactic. The thing is, you need excellent equipment and a high level to take on the enemies, as you are not able to instantly revive fallen companions on the field for quite some time, and you will be ambushed by a screen full of characters thanks to the random battle mechanic. You will have to go through a level grind period four separate times in order to beef up your characters for their respective chapters, but thankfully, when you hit the final one, they are already leveled up thanks to your earlier work.

Battles themselves play out like most turn-based RPGs, with your standard set of “Fight”, “Magic”, and “Item” commands. You cannot select which enemy you are attacking, but you instead choose a group. Your AI companions are pretty good about picking the same enemy as you for the most part, and throughout most of the game you will not be one-shot killing the opposition, so that’s a good thing.

When you die in battle, you return to your last save point, retaining all of your experience and items collected since last time you saved, but you will lose half of your current gold supply.

The bank feature seen in more recent DQ outings is nonexistent, though there is an item you can collect that will allow you to avoid losing gold entirely upon dying. Until that time though, you might want to wade in the shallow end of the pool until you are sufficiently leveled.

As for the story, your nameless Hero is the Chosen One, and only he and his Chosen companions have the ability to defeat the evil power that threatens existence and the world you live in. You’ve heard this yarn spun a thousand times over since the time of DQ’s original release, but if you’re playing an old-school RPG for story, you’re barking up the wrong tree.

Nowadays, you need a story and a nifty battle mechanic to hook fans to an RPG, but back in the old country, we couldn’t afford to have both at the same time. Know going in that while this story is better than the DQ games that came before it-especially with the chapters game mechanic-it is nowhere near what you dealt with in more recent Dragon Quest outings.

Your characters are sprite-based, and it’s a good look for the game. Nothing in particular stands out as impressive visually, though Akira Toriyama’s character designs continue to improve, looking less and less like his work with Dragon Ball Z.

The menus are as simple as can be, both to use and to look at-this is only a disappointment in battle, as the battles could have run on the top screen with touch screen menus on the bottom, but instead, Hit Points and other battle stats are tracked on a plain looking menu up top. The lone change in that screen comes with the time of day in-game, as it will reflect what time the battle started, be it day, dusk or night. Overall, the lack of stylus integration is somewhat disappointing, but in a way it would feel out of place in a game that strives so much to retain its classic, old-school charm.

As for the sound and music, both are cut from the mold of DQ releases past and present. Dragon Quest, unlike Final Fantasy, reuses and recycles many of the songs and sounds of its past, which in a way, helps to perpetuate the idea of a Draqon Quest universe and style. Luckily, these sounds and tunes are top-notch, as Koichi Sugiyami has once again done an excellent job with his work. The soundtrack from the original DQIV is a classic anyways, as the orchestral version of these songs was released as a soundtrack, and is considered one of the best in gaming history. A

long with quality sound, the localization work is superb, and may be the best part of the remake. There are various dialects depending on region-you will travel to an area that sounds like Russia, as well as locales that evocative of Scotland and Ireland. It makes the dialogue of NPC’s fun to read, and helps to give some of your characters more of an identity.

Here we have a game that is easily the cream of the classic Dragon Quest crop, remade to be a more impressive looking 2D, sprite-based outing than it was initially. It’s a different angle than the one Square Enix used for that other number IV, but that’s intentional, as even DQ’s modern, 3D outings such as the eighth entry in the series scream old-school and hardcore. If you aren’t into the turn-based, level grinding scene, this game is not for you, but if you’re up for a trip down memory lane-or have never experienced DQIV in the past-this game is worth your time.