Talk about playing to your base. The 2004 Gameboy Advance title Kingdom Hearts: Chain of Memories is being remade for PlayStation 2 (note: not updated for PlayStation 3) and will be released December 2.

Kingdom Hearts games were massive successes on PlayStation 2 in 2002 and 2006 when the game and its sequel were originally released. Chain of Memories should build on that, despite the fact that it was a mediocre GBA game and is not coming out with all the bells and whistles of PlayStation 3.

Sora, Donald and Goofy travel down a long road that meanders through endless fields, and come to a crossroads. As Sora stands in the crossroads, he gazes up at the night sky and thinks of his lost friends.

Just then, a mysterious man approaches from down one of the branching paths. “Ahead lies something you need,” he says, “but to claim it, you must lose something dear.” The man vanishes before a single path, leading to a castle that eerily resembles a girl’s drawing…

In the coming journey, what will Sora and his companions gain, and what will they lose? 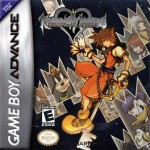 “Memories” is expected to cost $29.99. It joins‚ Kingdom Hearts 358/2 Days that is due out for the Nintendo DS later this year.