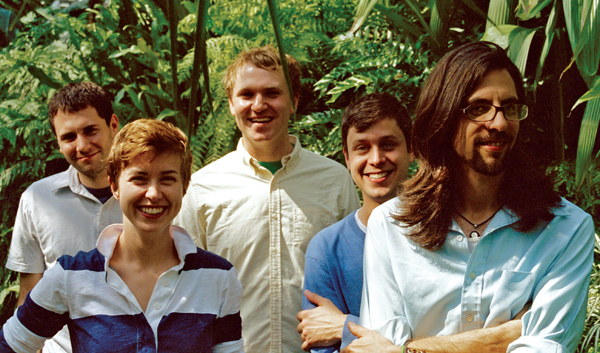 For Bobby Gallivan, deciding on a career has clearly proven difficult. The lead singer of Chicago quintet Bound Stems teaches high school history when he’s not on the road or in the studio with his bandmates (a summer vacation once included a performance at Lollapalooza). The rest of the group (guitarist Dan Fleury, bassist/keyboardist Dan Radzicki, drummer Evan Sult and multi-instrumentalist Janie Porche) also left behind their day jobs – as technicians, Web designers, and the like – to tour behind their debut album, 2006’s “Appreciation Night.”

Bound Stems’ sophomore effort, “The Family Afloat,” out September 9, makes a convincing case that Gallivan and company could have made their livings practicing psychology and family dynamics. Unifying the record are repeated references to childhood (“I grew up the same way you did”) and the inescapable pull of home (“We said she’s got one foot out the door”).

The album also showcases Gallivan’s academic background on tracks like “Winston,” a folksy number that offers a glimpse into the friendship between the British prime minister and President Roosevelt, name-dropping both leaders (and Churchill’s wife Clementine) along the way.

“The Family Afloat” has the nostalgic, musical scrapbook feel of Arcade Fire’s “Funeral,” but doesn’t quite live up to the latter’s grandeur. The overlapping vocals on album closer “Sugar City Magic” evoke the feeling of a chaotic household full of relatives struggling to be heard over one another. “Welcome to our home … I’ve been keepin’ this family afloat for years,” Porche intones in the background.

Musically, each track has its bright moments, but many appear to be disjointed; the attempt to blend art-rock instrumentation and catchy choruses isn’t always successful. Even after repeated plays, it’s difficult to commit a single track in its entirety to memory. But, if nothing else, “The Family Afloat” allows Gallivan and company to impart neatly-packaged lessons in relationships – both personal and political.