There’s light, and there’s light. In the world of optical electronics, the difference between blue-green, red and yellow is equal to the beautiful variety that, say, Beethoven imagined in a symphony, or the stunning complexity that Einstein pictured shaping the Universe.

For Martin Schubert, a 25-year-old doctoral student at Rensselaer Polytechnic Institute, discovering a new way of looking at the LED, or Light-Emitting Diode, is going to change the way the world sees. That accomplishment earned him the $30,000 Lemelson-Rensselaer Prize for 2008.

Precisely, Schubert discovered that ordinary LEDs produce polarized light – a lot of it. That means more energy-efficient, compact displays for everyday tech objects. Before Schubert’s find, normal LEDs had never been known to produce polarized light. Schubert, on a hunch, decided to take readings from the sides of diodes, as all other readings were done from the top, and found the previously undetected polarized light literally pouring out. Even senior experts in his field didn’t anticipate that development.

Schubert then created a reflector that directed the light vertically; creating a truly and potentially cheap source of polarized LED.

“Discovering that normal LEDs emitted polarized light at a ratio of 7:1 from the side, that was big moment,” said Schubert. “Shortly afterwards we made a reflector in a certain way so we could use that light. Those were two big moments.”

Why is accessible polarized light with the possibility of cheap manufacture a big deal?
In order to put Schubert’s accomplishment in perspective, an explanation of the way current lighting technology works in such things as laptops is beneficial. In most laptops, the LCD, or Liquid Crystal Display, is sandwiched in, “a stack of thin films,” said Schubert.

First, there’s the source light, which is generally fluorescent and not polarized. From there it goes through a liquid crystal polarizing filter. After that, it goes through a second polarizer, and then the light hits your eyes.

Some of the drawbacks to this method have to do with the lighting source itself, fluorescence, which utilizes highly toxic mercury. Another is that a significant amount of energy is needed to create light that is sufficiently bright to penetrate the polarizing filters.

While the some recent LCD displays have utilized LED as source lights, such as the extremely thin LCD on the MacAir and some high definition televisions, a polarizing filter is still required, adding not only to the overall thickness, but energy consumption.

In creating an LED that’s polarized at the source, the filtering layers are bypassed, leading to greater energy efficiency and a potentially razor-thin display.

“You lose at least 50% intensity starting with unpolarized light,” said Schubert. “Basically, that’s what motivated me to create a polarized LED. I decided a it would be a great thing to have in LCDs.”

While Schubert’s method isn’t the only way of creating a polarized LED light, it is the cheapest and least labor intensive. The reason has to do with two fundamentally different manufacturing methods. 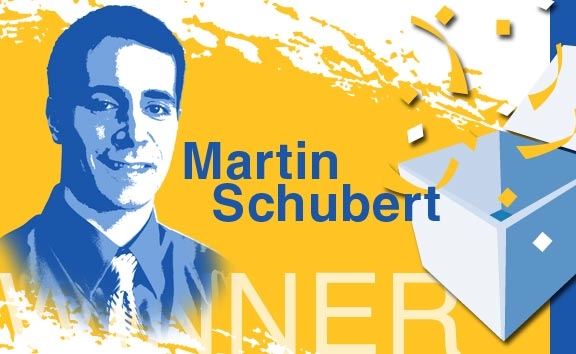 In order to create a single LED, special crystals are first grown using one of two methods, C-PLANE or M-PLANE.

C-PLANE is currently the industry standard, as growing crystals using the C-PLANE method is faster and lower cost. In order for polarized LEDs using the M-PLANE method to become a reality, the entire manufacturing industry would have to convert to that method – an unlikely possibility, according to Schubert.

“One of my limitations when I first started out was that I couldn’t use that sort of esoteric growth technique. That was a self-imposed limitation,” said Schubert. “I would consider this the first practical way to make polarized LED lighting. You can take what’s being made on assembly line today and just change the chipset.”

And the benefits of readily available polarized LED lighting extend beyond LCD displays.

Schubert cited robotic applications as one example. In trying to teach machines to translate visual data in a way similar to the human eye, polarized light is the holy grail, as it is far easier for robots to interpret. Widely available polarized light could lead to cheaply manufactured robots that have high visual acuity, roaming the halls of, say, a hospital carrying medications or charts.

Schubert’s plans don’t stop with polarized LEDs, either. His plans for the future include researching ways to create LED lights capable of enough power for standard home lighting applications. Currently that is not possible, due to what’s known as, “efficiency droop.”

One of the limitations with LED lighting is that after achieving certain brightness, the power needed to increase the level of light increases by orders of magnitude. So, more power can be given to the LED, but the return in brightness drops quickly to levels that make the power input impractical.

He is also interested in developing more efficient Ultra Violet LEDs, as currently UV LEDs burn out at a rate that hinders their use in widespread applications. Long-life UV LEDs would be beneficial in a plethora of applications, from water sanitation, hospital sterilization, to tanning beds.

If Schubert or other scientists solved the efficiency droop issue and created LEDs for standard household lighting, the power savings are potentially enormous: LEDs use 10 percent of the energy of a standard bulb.

“I saw a statistic that 20 percent of all energy consumed in this country is for lighting. If you increase efficiency by switching over to LEDs, you could shut down hundreds of power plants,” said Schubert. “LEDs are also very long lifetime. They almost never burn out.”

And if Schubert has anything to say about it, you’ll never have to change a light bulb again.