Creation of a successful Doom level requires that the PWAD designer be aware of the “physical” sizes and limitations of the Doom world. On a less critical level, the choice of wall, floor, and ceiling textures will have some influence on room dimensions. This document is primarily concerned with physical limitations. This document is not complete,
and as I explain below, it is not absolute either. I regret that I haven’t determined the map limits of a Doom level. The data structures would appear to allow grid coordinates as well and floor/ceiling heights from -32768..32767. However, map editors impose stricter limits.

To determine physical limitations, I created a simple level with three sectors resembling this:

By manipulating the height and width of the center sector I was able to determine minimum clearances. While it was easy to perform tests with “the player”, it was a little trickier testing the various enemies. I had to get an enemy to chase me through the center hallway. Unfortunately, this does not lead to definitive results. If the width of the hallway is
near the minimum limit, the enemy is far less likely to enter the hallway within a short period of time. This would give the false impression that the hallway is already too narrow. I advise PWAD designers to allow extra clearance if it is intended that enemies move easily from one sector to the next.

After performing most of my tests, I received the April 13 version of “The Unofficial Doom Specs” by Matt Fell. Unlike the earlier version I had been using, this version provided the actual width and height of each object. I found this useful in comfirming most (but not all) of my test results and for filling in the missing data on the Spiderdemon which I
hadn’t tested at all. (Many thanks to Matt for his invaluable contributions). It appears that the minimum width through which an object will pass is greater than the actual diameter of the object. For example, The 32-wide player requires a width of 33 (although Fell reports a minimum width of 34). I will list the physical dimensions as well as the minimum clearances I have actually seen work. I left a value empty (“-“) if I hadn’t satisfactorily established a minimum. 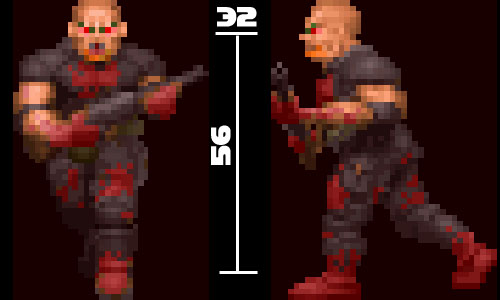 ANOTHER NOTE: When passing from one sector to the next, an object must fit between the higher of the two floors and the lower of the two ceilings.

It appears that any creature with legs can step up as many as 24 units at a time. (I haven’t verified this with the Spiderdemon). As we all know, the player can step down from any height. Enemies appear to be limited to descending at most 24 units at a time. (Floating enemies aren’t constrained by steps).

Although a simple step up or down is easy to handle, stairways arefar more complicated. I figured that the depth of each step (the distance front of one step to the front of the next step) had to be a factor. The test results confirmed this but were confusing at best.

The player can climb steps with a depth as *narrow as 1*! This could be creatively used in PWADS since it would appear that the player is scaling a sheer wall.

Enemies are much more picky about steps. For example, I discovered that a trooper would descend stairs that had a minimum step depth of 33 with the maximum riser height of 24. When I changed the riser height to some smaller value, the mimimum required depth got smaller too. I gasped in horror realizing the amount of work it would take to figure out the magic formula, by trial and error, for each enemy. For what it’s worth, the following table shows the minimum observed depth for 24-unit risers. You can assume these to be a safe values for any smaller riser. If your creatures appear to be afraid of the stairs, try adjusting the riser to depth ratio to create a kinder and gentler stairway. (I did not test the
Cyberdemon or the Spiderdemon in this area.)

Unlike the physical limits described above, wall/room dimensions are determined more by aesthetic factors than by numerical requirements. However, in the absence of hard rules, there are magic numbers and standard situations that come up from time to time. It is not practical to cover every situation here. When in doubt, you should always examine any of the stardard Doom levels for guidance. It is helpful to always think in powers of 2. Doom level editors should provide a user setable snap grid adjustable down to 8 units.

Room sizes are, of couse, entirely arbitrary. However, hallway and corridor widths are commonly 64 or 128 units wide.

Most general wall textures are 128 x 128 units. The manner in which the wall textures are rendered is described in a separate document (MANAGING TEXTURES AND THE “UNPEGGED” ATTRIBUTE). The use of “unpegged” attributes and X, Y offset modifiers enables the PWAD designer to satisfactorily use these wall textures on any wall space.

Some of the available wall textures have more specific uses such as doors, switches, decorations, and wall thickness filler. Doors are usually 64 or 128 units wide. Door heights can vary. 72 units seems to be a common door height in the standard Doom levels.

Decorations and switches normally appear on wall textures that are 64 units wide (a few are 128). When placing these textures on non-standard wall widths, the decoration/switch will not appear centered without adjusting the texture X-offset.

Wall thickness filler is used on the insides of door tracks, windows, and the occasional alcove. Textures intended for such use normally 8 or 16 units wide but are designed to tile well with non-standard wall thicknesses and heights.

Special stair riser textures are 8 and 16 units high. However, any texture may be used on a stair riser.

The textures used for floors and ceilings are all 64 x 64 units. Unlike wall textures, floor and ceiling textures are aligned and oriented with respect to the underlying map coordinate grid. Since these textures are tiled globally, they will always create seamless transitions from one sector to the next (assuming the adjoining sector has similar floor/ceiling textures).

There are some special stair step textures (STEP1 and STEP2). These could be used for the top surface of each stair. If you wish to use these textures for your stairs, make sure you pick the texure with the proper north/south or east/west orientation and snap your stairs to a 64-unit width and a 32-unit depth.

Occasionally, a PWAD designer wishes to create a Doom level based on an actual place (such as his office building or home). I undertook such a project using the actual blue prints as my reference. This creates the problem of equating Doom measurement units to real world units. There is no magic formula. The Doom engine does not appear to render things with consistant aspect ratio. For my project, I found that the following scale produced a satisfying result that “felt right” when walking through the level:

You may wish to experiment with these values to suit your tastes. The vertical scale seems to be the hardest to pin down. Heights look different in Doom depending on whether the player is near or far from the feature in question.