I never liked fish growing up. I was a (very, very) picky child who loved his chicken nuggets. So on Fridays of Lent, it was usually peanut butter saltine sandwiches packed away in my lunch box, while pizza was a good bet at night. But my family loves fish.

We have a seafood feast on major holidays, especially Christmas and New Year’s, with fillet, fried shrimp, calamari, stuffed clams, lobster or crab sauce and plenty of claws to crack and pass around.

Now that I’ve opened my eating horizons, fish is a distinctive option, not only for the holidays and Friday nights, but for a healthy, refreshing alternative to chicken, steak and pork.

I want to show off a family-inspired recipe that illustrates clearly that the Italians don’t just batter and deep fry their fish. Today is Good Friday, so I bought a beautiful, large cut of cod fillet, and I’m going to bake it and serve the fish with some sauteed vegetables.

By the way, a single serving is only six Weight Watchers points.

First, I take my cod and soak it in water with a light squeeze of lemon for five minutes. Take it out, and let the water drain off. Lightly coat both sides in salt and pepper. I use coarse, kosher salt, but anything works.

Take a deep baking pan and cover it in aluminum foil. Coat the foil in non-stick cooking spray.

Take 2-3 pieces of lemon and one diced plum (or any…) tomato and lay them down across where you’re going to put the fish. Dash on a little salt, pepper, basil, oregano, parsley, whatever you want. Drizzle some olive oil.

Take a small handful of Italian breadcrumbs and sprinkle the back of the fish. Lay it down over the lemon wedges and tomato. sprinkle a few more crumbs over the top — just a bit. Then take 4-6 Ritz crackers and crush them, two at a time, with your hands, letting the crumbs fall over the top of the cod.

Then dice one or two more small tomatoes, and cover the crumbs. Coat with some more salt, pepper, cayenne pepper and whatever spices you like best. Drizzle some more olive oil on top.

I like to leave some onion pieces in the corners, and you can add any vegetables you want to the pan. I didn’t in this case, because I’m serving other veggies with the fish. Don’t cover the cod, but crinkle the sides of the foil up just a bit on each side.

Bake for 30-40 minutes or until it cleanly flakes with a fork. You may need less time if you use a smaller piece. 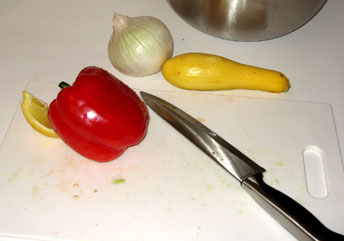 Now, take out your favorite chef’s knife, and cut up some veggies.

I stress that you can use whatever vegetables you want, but I chose some red and green peppers, a white onion and a yellow squash. It’s a colorful mix; it’s beautiful; it tastes unbelieveable.

Cut some narrow strips or slices of your favorites and shake them up with salt, pepper, Adobo spice, parsley, garlic powder, etc. This is not an exact science, but DON’T OVER SEASON your veggies. Too much, and they’ll be saltier than McDonald’s French Fries and it will ruin the dish.

Lightly coat a nonstick frying pan or wok with olive oil and warm over medium-high heat. Add the vegetables, and continuously stir then for about five minutes or until you can easily break one with the spatula.

Invest in a $1 wooden spatula. It cleans in the dishwasher and won’t rust or scratch your pans.

After about 5-7 minutes, cover the pan for 2-3 minutes. You don’t want to steam the vegetables, but you want to force them to hold in some moisture. Then uncover the pan and drizzle about a tablespoon or two of soy sauce. This departs from tradition just a bit, but trust me. Stir it in, and turn off the heat.

You want to start cooking the vegetables about 2/3 though the cod’s cooking cycle.

When the fish is done — depending on the size and number of people — spread some vegetables over the center of each plate. With a a spatula, cut even pieces of fish. Discard the cooked lemon wedges (the fish tastes lemony enough) and serve with the tomatoes and whatever else is in the pan.

This is a very filling, very, very healthy dish. The kicked-up veggies replace the need for rice or potatoes or French fries.

Enjoy with a glass of white wine, and have a Happy Easter!