SAN FRANCISCO — It’s safe to say that the Xbox 360’s launch lineup was, to put it nicely, lacking. Sure, there was the usual early-bird fodder of sports, racing and licensed titles, but nothing seemed to stand out. That is, except for Condemned: Criminal Origins.

Monolith Games’ first person, dark, noir shooter was everything highly advertised games like Kameo and Project Dark Zero were not.

It would be easy then, for the team at Monolith Games to simply update the original game for this spring’s sequel: Condemned 2: Bloodshot, but thankfully, producer Constantine Hantzopoulos and team have created what can only be described as an entirely new experience.

“Condemned was a sleeper hit, a lot of people thought it was a really good game,” Hantzopoulos told BLAST in a recent interview on their home turf. “We were a launch title though, and that can be very difficult. We sort of had to make sacrifices. Are we proud of it? Sure, but it wasn’t exactly the game we set out to make in terms of the combat, the world being flushed out.”

“I think the big thing we’ve tried to do with Condemned 2 is basically try to answer every complaint, and create something worthwhile. This is not a 1.5, this isn’t even a 1.0 – it’s kind of a new game all together.”

One of the gaming communities main complaints with the original Condemned was just how linear the gameplay was — a non-issue with Bloodshot. “We now have primary, secondary and tertiary objectives, which is something entirely new to the series,” said Hantzopoulos.

Of course, the game’s primary objectives are those dealing with the game’s main plotline, which advance the story of Agent Ethan Thomas and his downward spiraling life. The secondary objectives deal with finding, and often times destroying objects (like meth labs and sonic emitters that mess with Agent Thomas’ brain) throughout the twisted world. 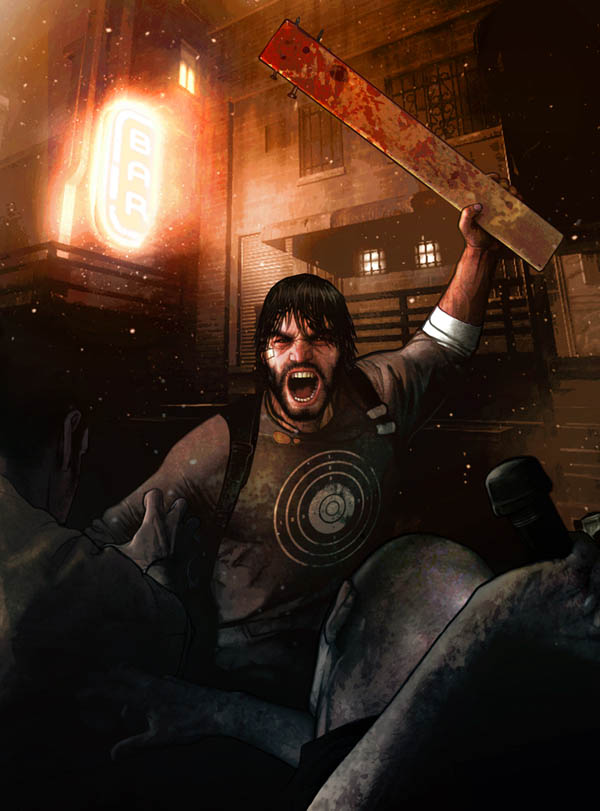 The tertiary objectives are all about creating a constantly changing game experience from moment to moment. Take the new user-initiated emotional responses. “They’re kind of like the mini cut scenes in Mass Effect, except this is Condemned so you’re whipping some guy the finger or confronting someone most of the time,” Hantzopoulos said.

The best part about Condemned’s new open style is that if you just feel like going through the story, the game let’s you make that choice, but will also reward gamers who take the time to complete each objective. At the end of each mission, players are scored and given either a bronze, silver or gold medal depending on how much they accomplished. While the medals may seem like just another notch on the belt for achievement whores — the system is tied directly to weapon upgrades (bronze medal = level 2 tazer, gold = level 5 tazer)

At the heart of Condemned is the weapon heavy combat system. Agent Thomas is able to grab items from the environment like 2×4’s and electric conduits (even toilet seats) to fend off crazed maniacs and thugs. As in the original, each weapon is classified based on factors including speed, strength and reach, but the biggest improvement to the game’s combat system is built on something that Hantzopoulos felt was a no-brainer.

“You could never fight with your fists in Condemned 1. How does that make sense? Build on top of that, fist fighting through the use of combos-one-two punches, roundhouses and so on and so forth-that cause more damage,” said Hantzopoulos.

Truth be told, Bloodshot’s combat system feels miles ahead of that of it’s predecessor. Built on “four layers,” the combat system can be quite deceptive. While most FPS type games make it easy for players to simply spam or go in and wildly attack their enemies – this tactic won’t get players far in the Condemned Universe as the system is based on parrying and timing. The left and right triggers act as your hands, and you have to time your blocks and strikes with your enemy’s attacks. Think of it as a twisted version of Fight Night Round 3.

Further more, the game goes even deeper with it’s new combo system. “You’re throwing punches and as long as you don’t get hit while you’re combo meter is on screen; that next punch will give you three, four even five times more damage.”

Gamers familiar with the first Condemned will remember that when they defeated an enemy, they would drop to their knees and be prone to a violent death. Originally limited to just four choices, Bloodshot gives players’ the ability to use much of their surroundings in their kills. We were witness to everything from broken necks, to bodies placed in fire – even a head slammed into a toilet or two. “There are about 35 environmental finishing moves that are very unique to each level, (and) these are tied to achievements. We want you to try them all,” said Hantzopoulos.

Undoubtedly one of the coolest parts of the Condemned series is the forensic science aspects.

Rather than present players with the same old puzzles, Condemned asks them to use authentic forensic science tools to investigate crime scenes and gain clues to the levels and the game’s storyline.

In the portion of the game shown to Blast on our exclusive preview, we were asked to answer a few questions regarding a body found in an old abandoned apartment building. The questions asked are surprisingly deep and require some actual investigation. I was asked everything from how the victim died, to the nature of the crime. Each question is met with multiple choice answers and is scored similarly to how the objectives in the mission are,

“For us it’s really about creating compelling gameplay. Is there something cool to do, interesting to see or fin to interact with? If we’ve answered all of those questions, then I think we have a success on our hands,” said Hantzopoulos.

Condemned 2: Bloodshot is shaping up to be a spectacular gaming experience that’s miles ahead of its predecessor in terms of both presentation and content.