Penthouse Magazine announced last week that their Pet of the Year is Mississippi-native Erica Ellyson.

Ellyson, January 2007’s Pet of the Month, was picked by the magazine’s readers out of 12 finalists. 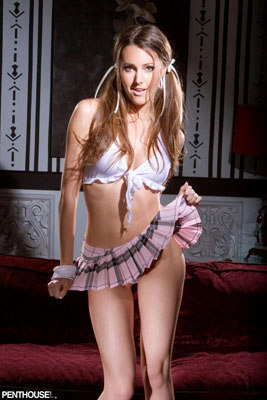 “It took me a while to believe I was the Pet of the Year,” Ellyson said. “When I found out I said, ‘Really? Are you sure?’ about five times. It was the best feeling ever, once I finally got it through my head!”

The sexy brunette is 5’7″, 23-years-old with hazel eyes. She is an architecture student at the Newschool of Architecture and Design in San Diego.

“Erica is smart, sexy, and a true Southern belle. As soon as she appeared in Penthouse as our Pet of the Month, she captured the hearts of our readers, as well as our staff, and she’s been extremely popular with Penthouse fans ever since,” said Penthouse managing editor Barbara Rice Thompson. “We’re delighted to have her as our Pet of the Year, and we’re sure she’ll continue to charm everyone she meets with her enticing looks and captivating personality, not to mention her irresistible sex appeal.”

“I’m so grateful to my fans and friends for their support, and I can’t wait to make new ones,” Ellyson said. “I’m excited to get out there as the 2008 Pet of the Year and be a representative of the Penthouse brand and family.”

Erica’s Pet of the Year pictorial is featured in the March issue of Penthouse. The magazine went for sale Feb. 19.