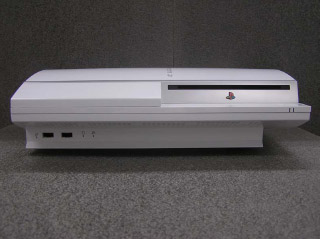 Our friends at CrunchGear diligently dug into FCC filings to find out that Sony is exploring the possibility of adding a ceramic white PlayStation 3 to their lineup.

There’s even plenty of photos to show that this is a serious possibility, and Sony Computer Entertainment America tells BLAST it’s a possibility, but not to bet on one way or the other just yet.

“There are many FCC filings like this each year,” said SCEA’s Alex Armour in a recent interview. “We haven’t made any announcements about upcoming PS3 plans, but are comfortable with our current two SKU strategy. We are continually evaluating the market trends and consumer input to determine the appropriate PS3 models for our territory.”

What does that mean? If they think they’d sell a bunch, they’ll release a white PS3.

What Sony did do was clear the governmental hurdles necessary to bring the product forward. And this all depends on whether or not the PlayStation 3 has the year everyone thinks it’s going to have. You might see a new bundled white PS3 with one or some of the new titles hitting stores soon, or for all we know Best Buy could do their thang and secure a “Best Buy Exclusive white PS3 with 2 controllers and 2 games for $499.”

But that’s pure wanton speculation on my part.