This article originally appeared on Reviewcenter.com in 1999 during an explosion of real-time strategy games.

After many battles, a former kingdom has been divided into many small principalities and earldoms. The king’s troops were pushed back into one last royal province, and the rulers of the other provinces waged terrible, destructive wars against one another. The whole land fell into a state of chaos and now the former royal capital itself is under siege by the armies of the rebel lords. You belong to the last remaining group of loyal king’s men, and have been commanded to go to the king in view of the imminent attack.

In my reading of a latest magazine, I had found that it had given Knights and Merchants a poor review. In the advertisements and previews I had seen, however, I found it to be a game deserving of a much higher rating. That is why I rushed to review it, to prove that magazine wrong, or at least to try. 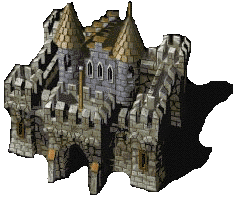 Well, I was right. Knights and Merchants gets a four star review from me. If the game were less complicated, it would have been perfect. The game’s battle system is very complex. A setup like that ought to be its own game. When you throw in the kingdom management, the game becomes very frenzied. Otherwise, it is the greatest detail I’ve ever seen in a game. Until it, Age of Empires was the best. But in Knights and Merchants, your little people do exactly what they should be doing. My favorite was the farmer on the vineyard. He put a basket on his back, walked out into the fields, and he picks the grapes off the vines. Then, he gets back to his house, pours the grapes out into a huge well, removes his shoes, and stomps on the grapes, making wine. That is exactly the kind of game that this is. Everything makes a whole lot of sense. Soldiers and servants need bread, sausage, and wine for food, and the serfs are expected to bring everything to them. Builders require wood and stone as they are working, and they will stop until they get these things from the serfs.

Another good thing about the game is the amount of people needed. In traditional RTS games, there is one servant/peon that will do all your day to day tasks. In Knights and Merchants, serfs only bring commodities to building sites, food to hungry troops, and other things like that. Then, builders only will construct your needed buildings, which are also very numerous. For wood, you need a saw mill; for bread, a windmill and a bakery; etc. There are so many different variations in this game. However for people who don’t like these complicated games, I wouldn’t recommend Knights and Merchants, but if you want a new style of Real-time Strategy, go buy Knights and Merchants.