Kreative Power, a newcomer to the technology market, has launched a funny-looking new surge protector in the shape of a pyramid.

The “Powramid” is a six-outlet cone of a power strip that’s actually pretty smart. It lets you plug large power adapters into each socket and is extremely compact.

Kreative says several models of the product are coming, but right now, their website only shows one, the E-900H.

Now, there’s not much to say about a surge protector, but you have to give these guys some credit for doing something different in the relatively vanilla world of surge protectors.

The E-900H will retail somewhere between $17-25, said Bonnie Jiang, Kreative’s sales director, in an interview Wednesday. The product will come in a wide variety of body and indicator light colors as well.

They’re also offering free t-shirts to anyone who preorders.

Kreative plans to highlight their new toy at CES, January 7-10 in Las Vegas. 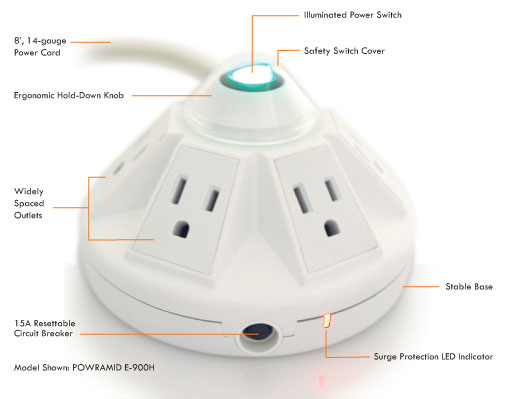