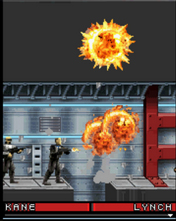 The mobile game was ported by Danish developer, Kiloo, with input from Io Interactive, the original development studio for the game.

Kane and Lynch has hit major consoles with mixed reviews lauding its original gameplay but questing its buggy controls and repetitive battle sequences.

Check with your wireless carrier for information of availability.

Kane & Lynch: Dead Men is a cinematic crime drama that tells a raw and gritty tale of two anti-heroes – one a flawed mercenary, the other a medicated psychopath: Forced to embark on a violent and chaotic journey and hating each other every step of the way, Kane & Lynch: Dead Men features a gripping storyline and relentless third-person action.
Spanning 38 action-packed levels across five very different scenarios, Kane and Lynch mobile takes the form of a fast paced action game. Armed with a wealth of firearms, explosives, deadly booby traps and gadgets, the pair must blast a path through each heavily-guarded location, using simple yet effective menu systems to switch between shotguns and assault rifles with ease.