Rock Band builds on the phenomenon started by Guitar Hero by using four instruments in 13 gameplay combinations, giving you deep and detailed playability. This includes solo play of each instrument, competitions and co-op play, forming your own band.

The game includes two guitar parts (bass and lead guitar), drums and a microphone. But you can’t form a band with two of the same instrument.

When I sat down to try the drums they were interesting but very tricky. You need to hit different drums at different beats, which is hard for someone that doesn’t know anything about drums.

It turns out that the game focuses on the foot pedal and the left most drum. If you concentrate on those you can afford to miss the others without failing out as easily. At first I was trying to hit everything and missing most of them. After I started concentrating on the left drum and the foot I would still miss a lot, but I could get through a song. 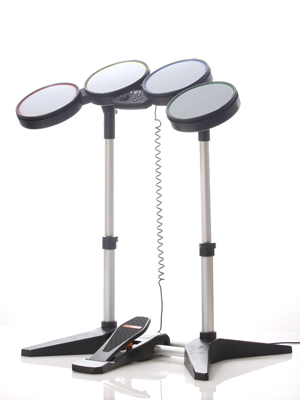 The Drums seem very reliable and will take a good amount of abuse. Harmonix said that they had broken sticks on the drums but didn’t break the instrument. They even play the drums with real drumsticks. The Rock Band kit comes with real 5A Drum Sticks.

They were also talking about people that had played the drums a lot are now able to play real drums. Harmonix said that if you play under expert mode it’s the same as the real drummer is playing.

Failing songs will bring down the rest of the band and can easily force the whole band to fail if not restored soon enough. Cooperation and team effort are vital in Rock Band.

The singing part has been improved on from older titles like Karaoke Revolution also. The game can detect pitches and a certain amount of phonetics. It can detect consonants and vowels, so it will have some idea if the player is singing the right words.

In Karaoke Revolution the player could just hum and be fine. The people at Harmonix were talking about that when they testing the game. The singing part in Rock Band doesn’t pay attention to octave, so men can sing woman’s parts and vice-versa.

The microphone doesn’t have controls on it, so it needs a regular system controller to navigate. They didn’t want people pressing the buttons by accident. We had enough trouble in the demo with people hitting the Xbox button on the guitar.

The Band World Tour is Rock Band’s biggest feature. You get together two or more friends to play in a band. Then you can go on a virtual tour. When on tour you earn money and fans depending on how well you play. Some venues will earn you more money or more fans.

It’s really realistic — if you play a charity concert than it will earn you more fans but won’t earn you any money.

The World Tour starts from a hometown that you pick. In your hometown you can play in certain clubs, and as your popularity gets bigger, you can pick bigger venues. The first ones are small dingy clubs, and then it moves to theaters and then hopefully to stadiums if your good enough.

There are over 40 different venues in the game and they are all very different from stone clubs in Germany to old wood carved walls in a Scandinavian club. The clubs are often based on real places.

Harmonix spent money licensing the songs. They got real tattoo artists to design the tattoos, and they got real artists to design the 2D stickers in the game. They decided against getting permission for the real locations. They also felt that real locations would have some negative connotations, if someone doesn’t like that particular club they may be annoyed at playing in it.

As you play through the venues once in a while before one it will pop up with a message saying if you get so many stars on this concert that you can get a tour bus. These messages also usually have a negative side if you fail. One that we saw was that if you finish the concert it would double your money, but if you fail you’ll lose all your money. As a band you then have to decide if the risk is worth the reward.

When the band gets a van they can leave their home city and start branching out to other cities. Eventually they even get a jet, and this allows them to leave the continent and go anywhere in the world.

When playing a concert it often is many songs in a row, unlike in solo play or in regular coop play. When the first song is finished you don’t leave the venue, you start the next song. This means you have to get both or more songs right to do well in the venue. You have to play the set.

When you form a band or play solo, you have to create a character. The characters are very customizable. You can select skin color hairstyle, be tall or short or be skinny or fat. The game even allows customizing the eye color. The player can pick a style for the character, from rock, metal, goth or punk. This will determine how he or she moves on the stage and what special moves they do.

Once the basic person is decided, they can go and get clothes. There are four stores in the game. The interesting thing with the rock shop is it looks like the Garment District in Cambridge, Mass. They admitted they loosely based the style from the Garment District, and the Canal Street Jeans, in New York City. They hired real apparel designers to help design the clothes and make sure that their clothes look authentic.

The special effects in the game are really nice, and the playing heads up display is transparent so you can see the stage very easily. It’s still easy not to pay attention to the stage when you’re playing though cause of concentrating on your part.

I found this game a blast, especially if you can get four people together to play as a band. Don’t give up right away — the drum part is really hard for new players, but even after playing it just one day I found it really fun.

I love this game.

Elizabeth Raftery, Daniel Peleschuk and John Guilfoil of the Blast Magazine staff contributed to this report.